For the first 3 quarters of 2018 the oil curve was in backwardation. (i.e. the front contract was higher in price than contracts further out the delivery curve.) Here we show WTI rolling 1st contract vs rolling 6th contract for illustrative purposes. This meant that long oil momentum traders enjoyed the added benefit of positive carry, creating a tailwind for the bull trade. Up until October, unstable Middle Eastern / US-Iranian geo-politics provided the narrative. 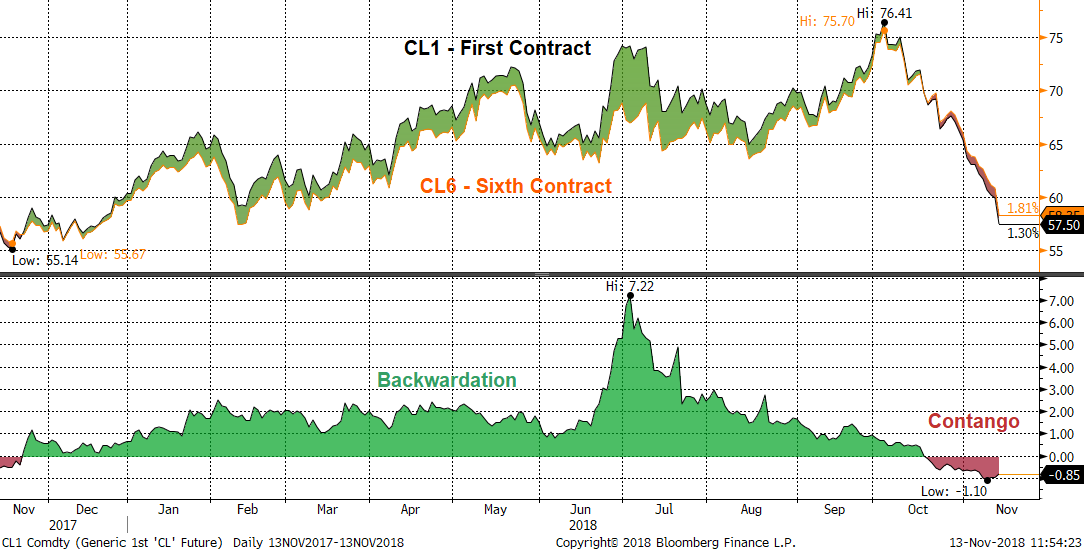 As so often with carry trades that suck in flighty capital, the exit is harder to execute than the entry (up the escalator / down the elevator shaft). As the oil market began to fall after Powell’s hawkish interview on October 3rd, the oil curve moved rapidly to contango (negative carry for long positions) and routed CTA, carry and momentum players. Talk of oil dumping in front of the mid-terms and the Khashoggi scandal supplied the necessary narrative reversal, whether or not it “should” have been sufficient to trigger such a severe move.
We would also note how Oil has moved with US Financial Conditions (GS version) and EM over the last few years. Both have been trending lower (we inverted GSFC) since the peak in late January. It seems to us that at least part of this Oil move has been a catch-up with what other markets are already pricing.